Blog - Latest News
You are here: Home / Networking / How To Get DNS When Internal DNS Servers Are Down

A few months ago, a coworker and I had to come in on a Saturday and replace a line card in our core Cisco switch. Of course the card that went down was the one connecting our VM infrastructure, so all of our core services went down with it (maybe there shouldn’t be a single point of failure for this…food for thought?). We were able to quickly restore connectivity up to the Internet, but our DNS servers were all VMs which had been knocked offline, and DNS is very handy to have when you’re interested in using Google services, Cisco articles and blogs to research information you need to get the network back online. My solution was to use Google’s public DNS server, which is located at the conveniently memorable IP address 8.8.8.8 (there’s a backup at the slightly less memorable 8.8.4.4). If your DHCP server is still running (ours wasn’t), you can just change the DNS servers on the clients without disturbing the IP address lease like in the screenshot below. 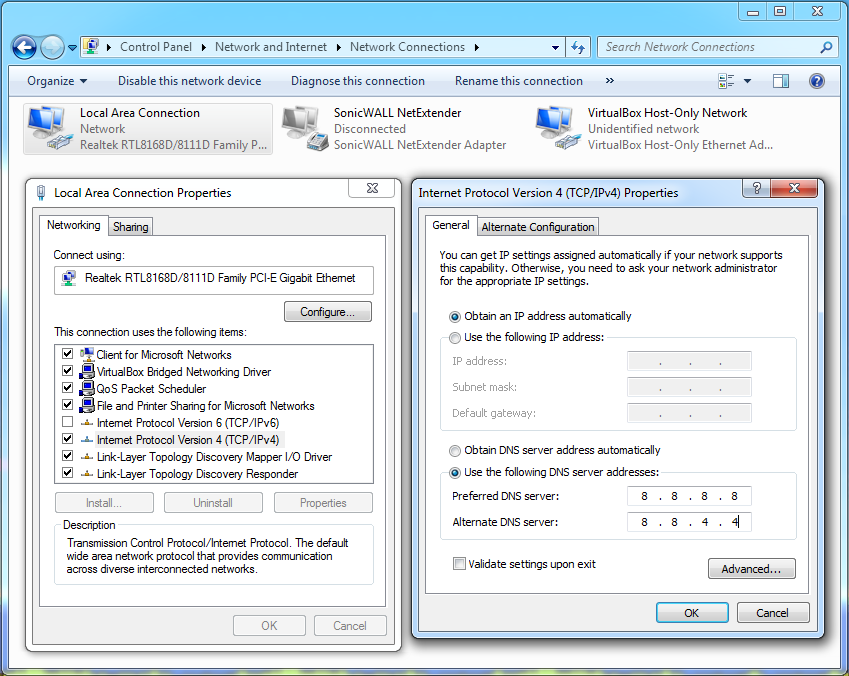 Notice that I haven’t disturbed the radio button for “Obtain IP address automatically” but that I’ve set static DNS server entries with the “Use the following DNS server addresses:” radio button. Hopefully you won’t have to do this for everyone in the office, but those critical staff members who need to browse immediately (you know…the person paying you) can be set up this way temporarily. Another option you have if DHCP is still running is to change the DNS servers option in your DHCP scope so that 8.8.8.8 and 8.8.4.4 are being offered first, then force a DHCP Request from the clients. The command to do this from the client side is:

So you could run that via whatever client management software you’re using, or have your intern type it in manually on all the workstations if you don’t have that capability. If you lack an intern and have users who aren’t tech savvy enough to confront the terrifying gray and black text window, you could just tell them to restart their computer and that should force a DHCP Request as well. If your DHCP server isn’t running, you’ll need to set a static IP address for computers that haven’t held onto a lease in addition to setting the DNS servers client-side. Hopefully one of these band-aid fixes will at least be enough to make someone happy or make your life easier while you’re working on bringing the internal DNS server back up. Best of luck!